First stop, a couple of nights at Howth great stop with train into Dublin for the day (20+ vans here tonight Saturday) off to Carlingford Sunday 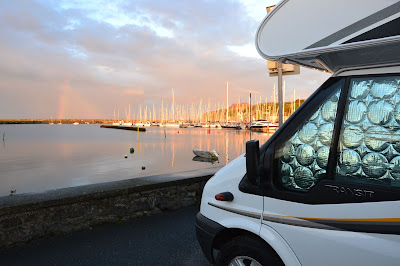 2nd stop at Carlingford Marina, great stop, good pubs in town and very busy for a Sunday. €10 a night with all facilities. 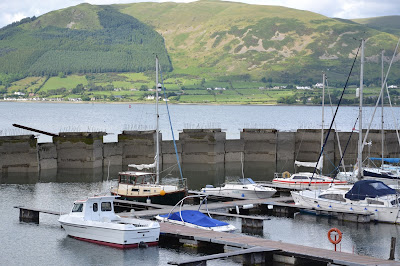 3rd stop at Island hill, free stop with a toilet block in lower car park , called at Annalong aire where they have problems with the local youth and there were fresh doughnut tyre marks so not a stop on my list,  and also at Shetrick castle which was a lovely spot with a great café but not very level. 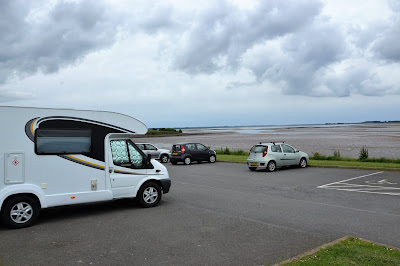 4th after a call at Carrickfergus and a tour of the castle (the aire had a fair on it so no stopover there.) Stopped to have a few drinks    with a very friendly couple close to Antrim 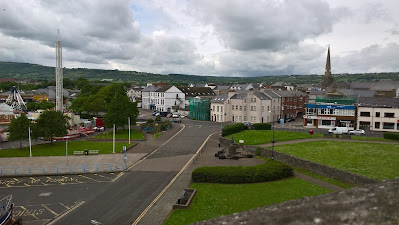 5th stop was Glenarm marina with a call at Broughshane aire (great aire but we were a little early for a stopover). 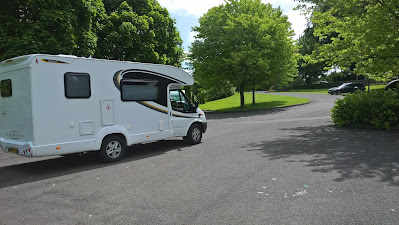 Glenarm was busy at first with about 20 French vans on a rally but they went on their way after a lunch break. Small town with a couple of pubs a craft shop and a general store. Also a castle but didn’t do that one. 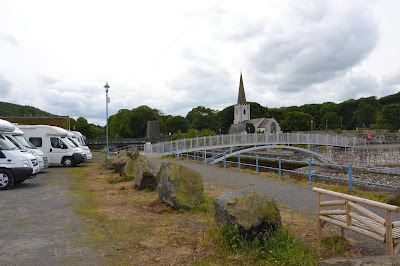 6th stop Castlerock prom , busy day today called at Cushendun (looks a nice stop) then up to Torr Head, bit of a hairy drive but worth it in the end, then onto Kinbane with some fantastic views but about 150 steps down to it and then you have to get back up   , after a lie down and lunch it was then onto the Carrick-a-rede  rope bridge but after parking up decided it was too busy so came away ,then onto the Giants causeway and as i have a membership for the national trust went onto the car park, the bus was also free but this again was mad busy as everyone from China must have been here (so you can imagine how hard it was to get a good pic),went from here to Portrush and as it was bouncing down with rain we were going to stop there and it does look a good set up but a few local brain dead youths put me off when they started messing about in the toilet block.( they seemed to get a kick out of throwing crisps through the windows and emptying packets all over the floor. ) 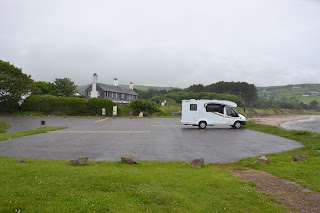 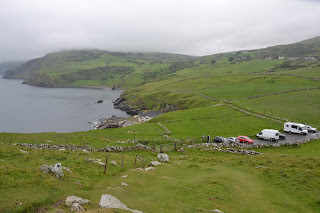 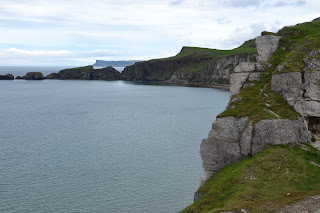 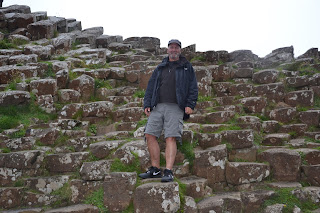 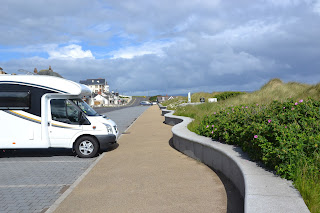 Great stop at Castlerock on the promenade, very quiet after 10 until 8 the next morning, called at the bakery on the way out to sample the sausage rolls and scones. Called at Magillan point (no ferry at the minute and very quiet) from here to Buncrana where we spent the day and a rainy night parked behind the tourist office .Some nice walks and i even got a pic of a heron catching fish. 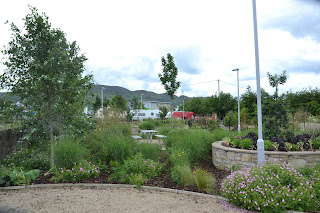 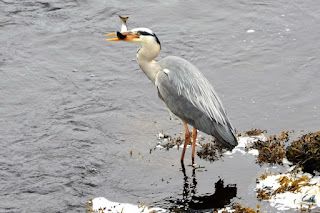 This is day eight but our seventh stop as we had 2 nights in Howth to train it into Dublin. Armed with info from the charming young lady in the tourist office we set off on the wild Atlantic way tour of Inishowen. First stop the waterfall at Gleneven, nice walk up the falls with a view point half way up. Then onto Pullan bay, and large beach and possible stopover, Then to the famine village where they had no overnight parking signs and a sign directing you to a couple of nearby caravan parks. I was talking to a lady here who i think was a local as she recommended the tea rooms and we got into a conversation about motor-homers not being catered for but they expect you to park in the day and spend your cash here and then farm you off to a campsite. She did see my side and agreed with me. The car park here was extremely large and could have accommodated motorhomes .From here it was off to Malin head ,great views but not a lot of room at the top for a motorhome ( i was lucky as a 4x4 was just coming out of a space otherwise i would have struggled to turn round never mind park. From here it was lunch outside the Seaview tavern (again great views) from here we decided to head back to Buncrana and spend another night there and then do the tour round Donegal tomorrow. 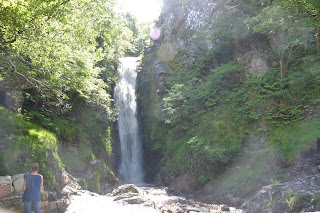 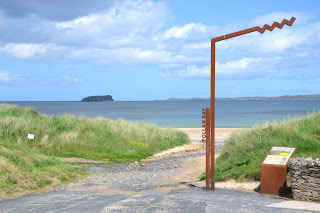 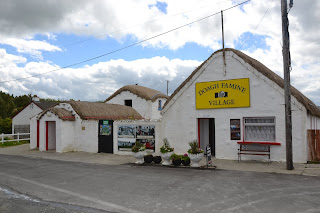 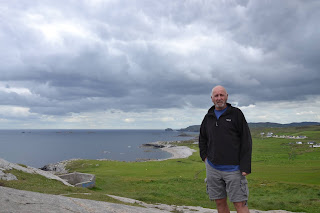 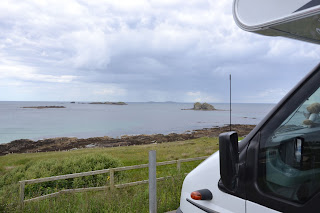 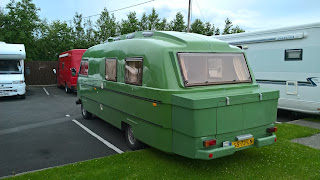 Sunday and it’s raining again so we decide to head off to the nearest 24 launderette at Mountain Top in Letterkenny. As we pass Donagheys we call in to check it out, you can stop here overnight with water and i think electric with a donation to charity. Glad they were closed as i could now be on my 7th van     . With the washing done we head up to Dunfanaghy for lunch and also take a look at Sheephaven bay pier which had a motorhome on it but not sure if it would be a good place to overnight as there's a campsite close by. Also looked at Wild Atlantic campsite but at €25 a night thought it was expensive .As its still raining and misty we decide to give the coast a miss on this trip and head to Donegal marina to spend the rest of the day and night .Free parking Sunday and overnight and we paid in the morning for a couple of hours which wasn't expensive. The downside of Donegal was the constant stream of noisy crap cars from the boy racers from 7pm until 12.30am. 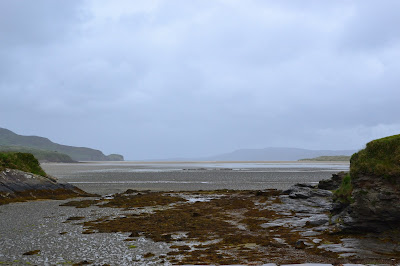 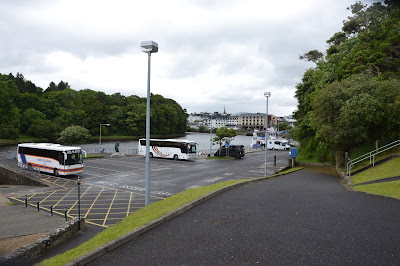 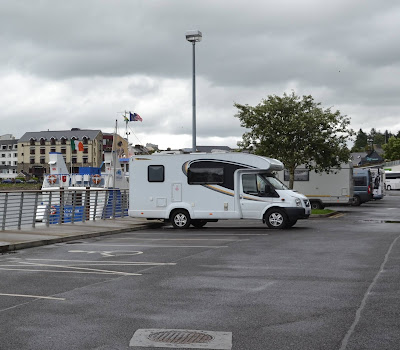 Monday it’s a run down to Sligo where we get a space on a meter close to town and spend a few hours enjoying the sights. From here we go up to Strand hill beach which is very busy with a constant stream of cars coming and going in the hour we were there. No overnight parking signs on the front. A quick check on the parking app and we head to Crossmolina to spend the night at the aire at Lough Conn. Very quiet here with good facilities and half a dozen other vans. Not sure if they get trouble with boy racers here as the car park at the bottom had doughnut marks on it, but we never saw any. 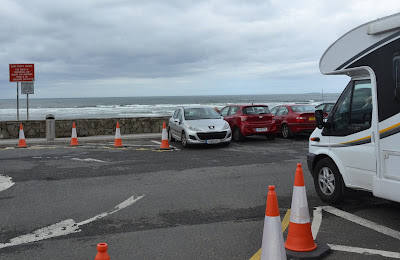 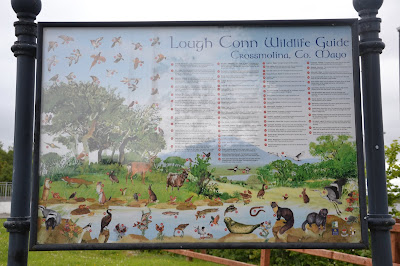 Tuesday and it’s not raining so we head off towards Galway down the WAW stopping at Newport where the app says there is parking alongside the river (we parked there and had a walk round the village) then off to Westport where we parked for lunch at another overnight stop at the Heritage centre. There were no camping signs further down towards the town and height barriers on the car park. It is a good walk down into the town from the heritage centre so we headed off into town in the van with the intention of parking at Tesco near the station but we found a car park close to the centre and got a space out of the way against the wall near to the shops .A couple of hours here and a few more souvenirs then it was off to Galway. 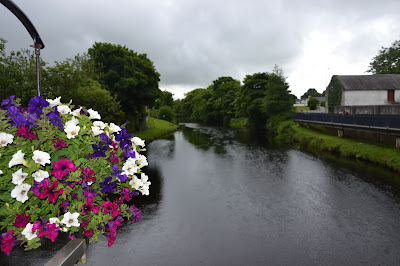 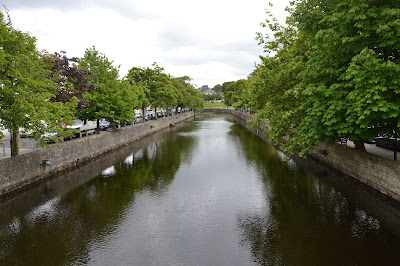 Wed A great evening last night at Galway love the hustle bustle and the music, Parked on the Marina €4 from 7pm until 8am and €2 an hour in the day, (got caught out as I didn’t check the time so it cost me €6 for the night). Only about half a dozen vans here but i can’t see the logic in reversing over the pavement with a bike rack on (causing problems for pedestrians), 3 of the vans did this and one (French) with a four bike rack overhanging. 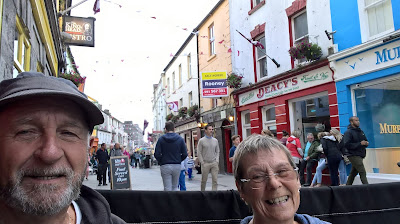 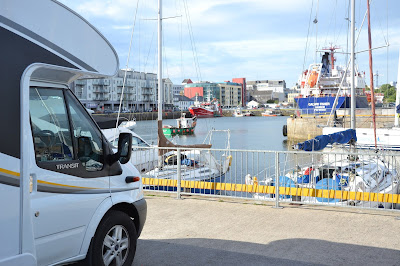 From here i called at Rinville where i had parked the last time i was here but now no overnight signs, then on to the newly opened aire at Portumna where we spent the afternoon sightseeing and a bit of shopping 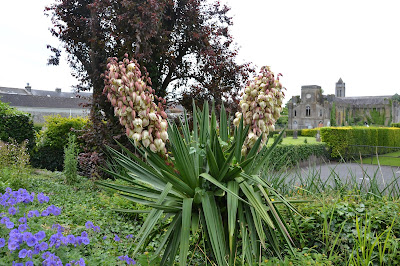 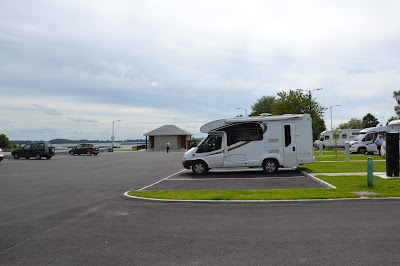 Thursday and it’s raining again (but we are heading towards Dublin for the Fri morning ferry, we stop off for lunch at the services on the M7 at Mayfield and find a coach service area that has black waste disposal and a water tap alongside it so useful if your heading that way .We then carry on to Howth to spend our last afternoon and night so we will be close to the ferry terminal.

We will be back soon